Would you like to switch to the accessible version of this site?

Don't need the accessible version of this site?

AMLA: THE FRUIT OF THE ELIXIR OF LIFE 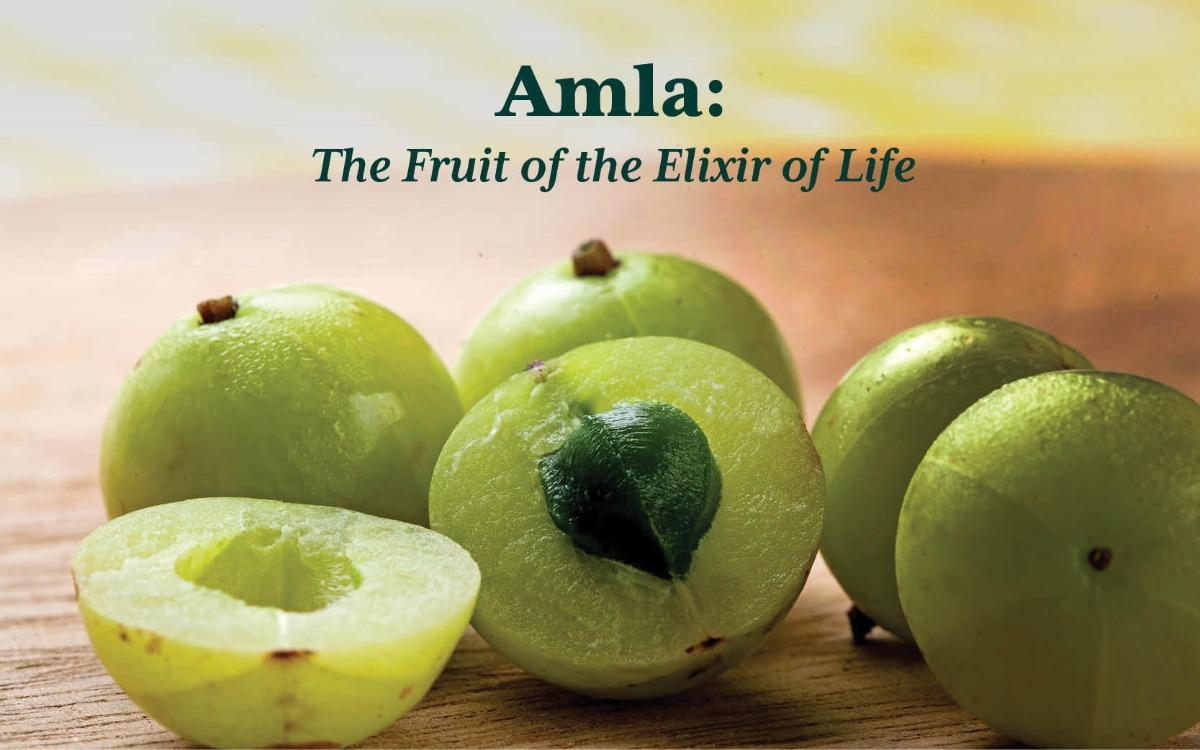 AMLA: THE FRUIT OF THE ELIXIR OF LIFE

Amla fruit, also known as Indian Gooseberry and scientifically named Phyllanthus emblica (formerly Emblica officinalis) is a plant of extraordinary importance in the Indian culture and plays a pivotal role in health and longevity. The reverence this tree commands is indicated both by the mythology surrounding the tree, as well as the multitude of scientific inquiries that have been launched into this super food. In mythology it is said that during a quarrel amongst the Gods, a fluid called Amrita, which has been translated as both “heavenly nectar” and “the elixir of life”, spilled upon the earth, whereupon the Amla tree began to sprout[i]. Moreover, in the Hindu calendar there exists a celebration called Amla Navami, a holiday that exists between October and November, where the Amla tree, it’s fruit, and all the medicinal gifts it provides, is celebrated. Meanwhile, research continues to refine and assess just how many gifts it provides as a medicinal food. A simple pub-med search of Amla, or its two previously mentioned scientific names yields over, 1000 clinical studies and phytochemical analyses. The diversity of research into Amla mirrors the diversity of its traditional applications. It has been used, and is still used today, for aid in respiratory conditions, cardiovascular support, preventing neoplasms, assisting metabolic and endocrine functions, sexual health, and for supporting healthy and complete digestion[ii]. With so many documented functions, it begs the question if it truly did spring out of a magical elixir.

How this panacea exerts its effects, like virtually all other plant medicines, is multifactorial and the symphonic effect of multiple constituents is what allows it to have so many useful functions in the body. The most popular and noted of Amla’s biochemical activities is through its effects as a potent antioxidant. Polyphenols such as the hydrolysable tannins phyllemblin, emlicol, and emblicanin all have been studied for their effects as potent dietary antioxidants. Phyllemblin is also known as ethyl gallate, is now manufactured and used as an additive in commercial foods for its antioxidant properties[iii]. Also adding to the antioxidant power of Amla is its content of vitamin C (ascorbic acid). After Barbados cherry, Amla is second richest natural source of vitamin C having approximately 600 to 700 mg per fruit [iv]. This combination of diverse antioxidants are what is currently being studied for Amla’s role in supporting healthy blood sugars, mitigating the severity of dyslipidemia, and decreased inflammation in those with chronic digestive tract inflammation[v]. Moreover, Alma has been further studied and found to be spasmolytic to the digestive tract, though the chemical or chemicals responsible for this effect are still being investigated[vi].

Additional research into Amla has supported its role in cardiovascular health. Amla seems to support cardiovascular health in two primary mechanisms. First, through dietary antioxidants already discussed and their known effects supporting vasculature at the capillary level; and the second, through improving liver function and ameliorating dyslipidemia, both of which contribute directly to long term cardiovascular health[vii]. A clinical trial of obese patients found after 12 weeks of supplementation of 500mg of Amla extract, there was a decrease in LDL cholesterol, platelet aggregation, and Hs-CRP levels[viii]. This combination of phytochemical study and clinical application are continuing to validate this plant’s long held title as a true whole body aid.

As Amla research continues to grow and support the utility of this plant in our overall health, we can see it come of particular use to individuals for whom digestion and absorption are suboptimal. Through its use as an antioxidant and digestive, it works well as a unique envoy between the digestive and absorptive processes of the body and the metabolism and utilization of the nutrients absorbed. Its antioxidants function to dampen down any inflammation that compromises either GI tract itself or its microbiome[ix], which ensures that which we bring in from the outside through the diet, is able to be utilized by the body for the greatest good. With its symphony of actions owing to its harmony of chemical constituents, it’s no wonder great songs are sung about this fruit that may have indeed sprouted from the elixir of life.

Find us on the map

If you’re thinking of getting a pet fish, you should know that your veterinarian has a lot of good advice about pet ownership. Fish can be very rewarding as pets, and you just may be surprised about how much fish actually interact with their owners. Here’s more valuable information about choosing ...

Cats rarely display their pain, but cats with feline stomatitis are often the exception. If your cat appears to have mouth pain, is reluctant to eat, doesn't want to groom, is drooling, and doesn't want you to open its mouth, it may be suffering from this debilitating, degenerative oral condition, and ...

Feline Leukemia Virus: What You Need to Know

Feline leukemia (FeLV) is a virus that weakens your cat's immune system. Unfortunately, when the immune system does not function properly, your cat may be more likely to develop other diseases, such as cancer and blood disorders. How Cats Contract Feline Leukemia Cats get feline leukemia from other cats. ...

Nothing must spoil the joys of becoming a new parent. Not even your pets. But family cats with normal, every day habits can pose a risk to expectant women. Women's immune systems can be disturbed by a parasite carried in fecal matter. If you're the primary caretaker of your family's feline friend it ...

Create an Environment Your Cat Will Love

The Journal of Feline Medicine and Surgery confirms that feline emotional wellbeing, behavior and physical health are a result of how comfortable they are in their environment. Understanding how our cats interact with their environment can help us create a space for owners and cats to mutually thrive ...

Catnip: Why Cats Love It

Few things stimulate a cat's pleasure faster than catnip. Exposure to this simple herb can reveal a new side to their feline personality. Many cats will go crazy at the smell of this plant. Catnip has a reputation of being a feline drug and many cat owners wonder if it is safe to give it to their pet. ...

Zoonosis refers to diseases that can be transmitted to humans from animals. In particular, they occur when an infected animal passes on bacteria, parasites, fungi or viruses to humans through scratches, saliva, feces and urine. Vectors (e.g., organisms like fleas and ticks) can also carry zoonotic diseases ...

Thinking of getting a sugar glider? These tiny marsupials are energetic and friendly, making them popular choices as pets. Though they weigh less than a half-pound, they're more closely related to kangaroos than they are flying squirrels. If you think a sugar glider would make an ideal pet for your family, ...

Epilepsy (often referred to as a seizure disorder) is a chronic neurological condition characterized by recurrent unprovoked seizures. It is commonly controlled with medication, although surgical methods are used as well. Epileptic seizures are classified both by their patterns of activity in the brain ...

Read What Our Clients Say